Fifty years ago I was working with Julie Driscoll, Brian Auger and The Trinity. We were in Paris at the famous L’Olympia Music Hall with top French music idol, Johnny Halliday. Also on the bill was an unknown newcomer performing his first ever show in Paris with a brand new band. His name: Jimi Hendrix; his band: The Jimi Hendrix Experience. We had arrived in Paris the previous morning and spent the day rehearsing.

Next day – after a suitable Gallic continental breakfast – we were back at L’Olympia rehearsing; for what I don’t know. This was just a basic music concert. The only thing that was out of the ordinary was, that at the end of our set, we would be joined onstage by everyone else who had been part of the first half, no big deal. But Giorgio Gomelsky wanted us to rehearse and he was nothing if not persistent.

Even Giorgio, though, was bound by time and, around 4:30pm he called a halt to the proceedings. Showtime was fast approaching and people needed time to get ready.

I was surprised when Michael Jeffrey walked up to me and said:

Michael was the manager of The Animals, as well as co-manager – with Chas Chandler – of Jimi Hendrix. He was not the sort of guy who wasted time with you without good reason.

We walked together to one of the many cafes on La Rue Caumartin. Perhaps it was even L’Olympia Café (see pic).

After we had ordered, Michael wasted no time but came right to the point:

I paused for maybe half a second.

Being with Brian had been great and I owed him a lot. He had been a mentor and a good friend. Musically I had grown by leaps and bounds because of the challenges of playing with such a demanding musician.

On the other hand, I felt like I was on a plateau, not musically but in terms of achievement. I was making a good living with Brian but as far as I could see I would be touring Brit R&B clubs for the foreseeable future. I was hungry; wanted more.

I made my decision quickly: “Yes”, I said.

We chatted on but the conversation was over. My life was going to be very different.

As we walked back to L’Olympia I was in a daze. The idea of joining one of the most popular bands in the world was very exciting. Best of all I knew that The Animals toured the US regularly and that was where I wanted to be. My American blood was calling me back home.

I was still in a daze when the concert started.

The theater that night was full of screaming hysterical Frenchmen; with a few token women in attendance. It was the exact opposite of what you would find at a British rock concert in that era. They screamed at every name when the acts were announced at the start of the show even though they had no idea who Jimi Hendrix, Julie Driscoll, Brian Auger and the Trinity were. The loudest screaming, of course, was reserved for Johnny Halliday.

First up were Les Blackburds. When Long Chris walked on with his guitar in the middle of an instrumental I could see his lips moving rapidly but it was impossible to hear what he was saying. I knew, however, that he was reciting that poem that I had learned from him earlier that day. 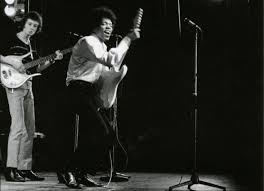 Next was Jimi. The crowd, of course, had no idea who he was but he did not disappoint. Although he was perhaps a little less flamboyant than he would be when his star really took off, he was still, well, Jimi.

Amazingly I discovered some pics of his performance and it’s interesting to see how conservative his dress is (see pic) compared to only a short time later. It was still less than a month after had arrived in London and the whirlwind that had been his life since his arrival had given him little time   browse the boutiques of Carnaby Street. Subdued though his outfit may have been, his show was anything but. He was all over the music and worked the audience like a master.

Because of my prejudice towards The Troggs, a band of overwhelming lameness who had made “Wild Thing” a huge it in the UK, I was shocked when Jimi played it that night. Jimi more than did justice to what I had to admit was a great rock and roll song and the crowd roared their approval.

They may have had no idea who Jimi Hendrix was but it was obvious they had never seen anything like him. The French were never big on finesse in Rock ‘n’ Roll, but they loved a show of raw power. And that is what Jimi gave them that night. That left us in the unenviable task of following Jimi on stage.

Brian, being a great clown, decided to run out on stage wearing a cardboard Napoleon hat and had the crowd roaring with laughter. But the minute he sat down at his organ the crowd started booing. This crowd was here for Rock ‘n’ Roll and they didn’t want anything that had the least little bit to do with jazz. Our music was just jazzy enough that the crowd felt it was out of place and they were going to make sure that we knew it.

The booing continued as we went into our second song; I can’t remember what it was. As we started our third song, Koko Taylor’s “Wang Dang Doodle”, we were joined onstage by Les Blackburds, Long Chris, Jimi with his guitar and a bunch of go-go dancers (see pic). This had no effect whatsoever on the booing.

The second half of the show was totally dedicated to Johnny Halliday and Les Blackburds. The crowd was now quite happy.

Johnny was a great showman and went through what I assumed were some of his previous hits, as well as some material that I recognized from his album that I had helped him record in London earlier that year. He finished with his hit “Noir c’est Noit” (Black is Black) on which I had played guitar. I found out recently that the concert – at least Johnny’s part – had been recorded and released on a CD. No word if any other part of it had been recorded.

During our disastrous set I had felt strangely detached from the whole thing. The daze I had felt after leaving the café stayed with me for the rest of the evening. It was as if I was now occupying a different psychic space from the rest of the band. My experience of being asked to join one of the biggest bands in the world was so overwhelming that all else seemed of minor importance, almost meaningless. My life would never be the same.

Nevertheless, I kept my own counsel, did nothing to anyone and tried to act as normal as I could. I was aware that things could change in a flash and did not want to sabotage my apparent good fortune until I could be sure this was for real.

We spent the next day relaxing in Paris and that evening drove back to the French Coast to catch the overnight ferry back to Dover.

It would be another two weeks before I felt confident enough to give my notice to Brian and begin my new life.

Over the next two years, I would follow Jimi onstage three more times, one of which was at L’Olympia. On each of the occasions we more than held our own. Of course on those occasions I would be playing with Eric Burdon and The Animals.