I have had several requests to write about YB’s relationship with Virsa Singh and what I know about the first India trip. I will do that, but I feel the need to move forward chronologically. Also, I want to finish the story of the 1970 Summer Solstice.

At the end of part 1, a group of ashram heads were being schooled in Native American spiritual practices in an all-night session, while occupying a tepee brought to the site by Tom and Lisa Law. The rest of us stayed up all night chanting.

Everyone was pretty tired from staying up so not too much happened that morning. Later on that day word went around the camp that we were moving. The Santa Clara Tribe wanted us out of there.

I was not party to the negotiations so I don’t know exactly why they asked us to leave. I don’t think there was any particular event that triggered the Guardians of the reservation. I never saw any nudity, I never smelled anyone smoking dope and there were certainly no drinkers nor wild parties. It seems that they just didn’t want a bunch of hippies – even if they were spiritual hippies – besmirching their camp sites.

So we dutifully packed up our cars and were told that we would leave in convoy. Eventually, we lined up and slowly drove down the mountain in line. When we got to the highway, we found YB standing in the middle of the road directing traffic. I think there is a picture of that online somewhere. It was indeed a sight to behold.

I have already mentioned Robert Boissier, the teacher of the previous night’s spiritual practices. A Frenchman, who had come to live in the Santa Fe area, he had found favor with one of the Native American Pueblos and had been initiated into their culture. Robert was a pivotal figure in the early relationship between 3HO and the Santa Fe Valley.

Robert had a passionate belief in the sacredness of the Santa Fe Valley, bounded – as he always would say – by the four mountain ranges. I can’t remember the names, except for the Sangre De Cristo Mountain range. He believed that area was a sanctuary of the Divine Feminine and that – in the coming troubled times (yes, that was a big part of YB’s shtick back then) – the area would be a refuge for many light workers, although that was not a term that was in use back then. They would flock to the valley and be safe from whatever was happening outside it.

And this is where it gets difficult to ascertain whether YB was a total con man – as some here think – or if there was sincerity in his early teaching. Did he really believe in the Resurgence of the Divine Feminine? Or was it just a device to enlist women into his movement? Certainly his revealed behavior would suggest the latter.

Whichever the case, he had Robert totally buying into his stories about how the Adi Shakti was returning to Earth and how She – the Divine Feminine – was an important part of the Sikh Religion. He made a believer out of Robert.

You’ll notice I deliberately do not use the word Sikhi here.

As an aside, once you know about the relationship between these two and these beliefs of the Divine Feminine in the Santa Fe valley, it’s easier to understand how the mural in the Espanola ashram came to be.

Robert owned some land about half way between Santa Fe and Espanola and that’s where we were headed. It was mostly an Arroyo.

Arroyos are dry river beds of which there are probably hundreds of thousands in the South Western United States and Northern Mexico. Arroyos are fine most of the time. However, when there is a flash flood, they become dangerous places to hang out. I’ll cut the suspense by saying that was not a problem for us while we were there.

There were, of course, no facilities whatsoever. No water, no toilets – although maybe some porta potties were brought in – no cooking facilities, no bathing facilities and so on. It was wilderness camping with a vengeance, although we were right next to civilization.

I haven’t driven from Santa Fe to Espanola in a long, long time, but I always used to take a great delight in pointing off to my left at this deserted dry river bed – which can easily be seen from the highway – and exclaiming proudly to anyone else seated in my vehicle, “That’s where we had the first Summer Solstice after we were thrown off the Indian Land.”

We made our way into this dry river bed, with only a handful of cars getting stuck in the sand, and pitched our tents, some right in the arroyo, others – like mine – amidst the scrub vegetation on its banks.

My normally reliable memory fails me when it comes to remembering the details of the next few days. Yoga classes were soon resumed. Well, naturally. That was our raison d’etre for being there in the first place. I do remember I always seemed to be heading out to the nearest convenience store – which was very close by – for this that and the other. I also remembering visiting some motel in Santa Fe that, for a small fee, would let you use their shower facilities. 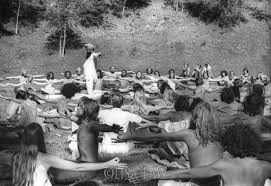 Google says this pic is from Summer Solstice 1970 so I must believe them. That may possibly me me to the right of YB and behind with the guitar, but I’m not totally sure.

YB decreed that we should live on watermelon for the rest of the time that we were there. The watermelon was to be liberally sprinkled with black pepper “to help with digestion”, and we were to make sure we ate the white part of the rind. I don’t know how many people actually stuck to this diet and I certainly can’t remember if I did. (I probably didn’t!)

There was one great blessing from being in this spot at a lower altitude – the nights were relatively mild. No more freezing after the sun went down.

The last day of the gathering would be Sunday June 28th and the big event of the day would be a mass wedding. I don’t know how the ladies who were to get married pulled it together but they did. At the appropriate time, the couples lined up in front of YB, the ladies looking quite beautiful, and were married.

Larry and Ganga, Baba Sat and Susie were the only ones I can remember. I also cannot remember the exact number of couples but there were a bunch.

I was anxious to get out of there. We were dirty and exhausted and there were 1400 miles between me and home.

As YB finished his talk, which would be the closing act of the gathering he said something that echoed in my mind all the way back to LA and which I have never forgotten.

“Life is just a big joke. And Yogi Bhajan is the biggest joke of all. Haha, haha etc.”

Everyone, of course, started roaring with laughter. For some reason I didn’t think it was very funny.

It was early afternoon when we left the Santa Fe area. Again I was pushing hard; I just wanted to get home.

Just outside Winona, Arizona, about 11pm, my gen light came on on my dashboard. I knew something was very wrong. On checking, I found that the fan had sheared off my water pump and pierced the radiator. And here I was out in the middle of the high desert in the middle of the night with 3 other people in the car.

We made it to Winona, which was closed for the night, and limped on to Flagstaff some miles down the road. I found a gas station that was open but they said they could not get me a water pump.

The next morning, after a night spent trying to sleep in the gas station parking lot, I found a wrecker’s yard, where the friendly owner lent me some tools so I could pull a radiator and water pump from an old Chevy and install them in my car. We made it back to LA that night.