I didn’t really know what I was getting myself into when I left LA in June of 1970 to drive to New Mexico for 3HO’s Summer Solstice Gathering.

You might have thought of me as a Hippy – and I certainly looked like one – but I was never very good at Hippiedom. Still, even if I was driving 1400 miles to spend 10 days with a bunch of Hippies, I knew at least they were spiritual Hippies. It also seemed fairly certain that there would be no alcohol, drugs or tobacco at this gathering.

I was, however, concerned about a long drive across the desert in the heat of June. Nevertheless, I threw some camping gear into my 63 Chevy station wagon and my girlfriend and I, along with another KY student who wanted a ride, headed out. For any oldsters reading this, the student was a lady named Janet Spagg.

I don’t remember my rationale why we left LA at around 4pm. Maybe I was worried about driving through the heat of the day. In any case, I drove all night and, late in the afternoon of the next day, we arrived at the site.

At the gate off the highway, there was a Hippy looking guy sitting there who told us that we had to pay $5 for the use of the campground. $5 to use a campground for 10 days? That’s outrageous. I wasn’t the only one who was upset. I guess we expected everything for free in those days.

I paid up and off we went. This camping and wilderness area was part of the Santa Clara Indian Reservation (I think). It was surprisingly close to the present day Solstice Site, being on the other side of that mountain.

We passed one camping meadow, but that wasn’t the place, then another, then another. I don’t remember how many sites we passed but we saw no signs of a spiritual gathering. All the while, we were climbing higher and higher up the mountainside. The scenery was changing. Rather than the desert scrub we had left, we were now seeing lush, verdant meadows, surrounded by Ponderosa Pines. The sky was a crystal blue and the sun was hot.

Finally we arrived at the 3HO site, which was the very last campground at the very top, high up on the mountain. The area was spotted with tents and lots of Hippy looking people who were getting settled and putting up tents. In one corner of the meadow, a teepee had been erected. I found a spot; we parked and pitched our tent right next to our car.

By now the sun had gone behind the mountain and, even though it was not yet dark, I could feel it getting colder. I had assumed (you know what they say about that word, right?) because we would be in New Mexico and it would be June that it would be hot. And it was – until the sun went down. Then it was cold; almost down to freezing cold. We spent a very uncomfortable night.

There was no central anything. No group food, we had to provide and cook our own, although it had been suggested that we should all be eating only brown rice for the duration. I don’t think too many people stuck to that

There was no central info place for anyone who had questions. The whole event seemed very disorganized. However there were rules. Most were what you might expect, but there was one that seemed to irk a lot of people. No nudity. 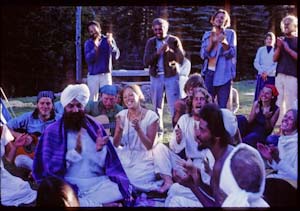 I’m sure many of the people who read this, perhaps most, would have been born a long time after the 60s and perhaps may not be familiar with Hippy philosophy. There was one thing you could count on with Hippies. The majority of them, male and female, were ready to shed their clothes at any opportunity, especially if there was sun and an open body of water.

Here, there was a mountain stream that flowed down the mountain and through all of the camp grounds with abundant, rippling, bubbling, but very cold water.

On his arrival in California, Yogi Bhajan soon became aware of the Hippy predilection for nudity and had moved quickly to make sure that his students understood that he was vehemently opposed to it. Disapproval of nakedness is deeply rooted in Indian culture. Apart from the odd naked sadhu wandering around – and they do, I’ve seen them right in the middle of Delhi – most Indians are horrified by nudity in any form.

There was another reason for the prohibition of nudity, along with drugs, cigarettes and alcohol. The Santa Clara custodians of the land were deeply suspicious of us as a group because we looked like Hippies. Well, of course, we were Hippies. But they had a hard time distinguishing between the spiritual Hippies – which we were – and the dope-smoking, free-love type of Hippies which we weren’t. Or, at least, were trying not to be. Before long we would find out how deeply that suspicion ran.

The next day, towards noon, YB showed up, he had been staying down below near Santa Fe. That day established his pattern. He would be driven up in the middle of the day, hang out, talk, teach yoga and then hightail it down the mountain before nightfall. So we spent our first days doing yoga in the blazing sun and the nights trying to stay warm.

I might mention that between 1970 and 1977, which was the first year at the present site, we were at three different sites in New Mexico, as well as one year in Colorado and one in Northern California. Each of those sites in NM was colder at night than the previous one. My first night spent at Ram Das Puri (present day) was a great relief when I realized that I would not freeze to death.

After a couple of days up the mountain, YB announced that the evening and night following would be a very special one. I don’t remember why. Maybe it was the night of Summer Solstice; maybe a full moon. Who knows?

Robert Boissier was a Frenchman who had come to live in the Santa Fe area. He and YB were great friends. Robert had found favour with one of the Native American Pueblos and had been initiated into their culture. Anyone who could share more about this guy, please add in comments. He might have married into the Pueblo.

YB went on to say that the heads of ashrams who were present would be spending the night in the teepee with Robert Boissier who would be initiating them into Native American ceremonies.

I can’t remember whether the rest of us stayed up all night chanting long Ek Ongkar or if we merely got up very early. What I do remember is, in the early light of dawn, the group of ashram heads emerged from the teepee and Robert, who was dressed like a Native American, led them in single file around the perimeter of the campground, while chanting.

Each of them was holding a stick of some kind back over their shoulder and, hanging from the stick, was something that looked like the tail of an animal; maybe a fox or raccoon or something. I thought they all looked a bit embarrassed, as well.

I was wondering if John Lamenzo was a part of that group or if there is anyone else reading this who can throw some light on what that was all about.

I made a mental note to check with one of the guys as to what had been imparted in the teepee but, as you will see, the events that followed changed everything.

Next: The Great Solstice Migration.