Living With The Dead

After the gig at the Whiskey, we were free. The tour was over and we had two weeks before our next commitment. Bill Kreutzman, Phil Lesh and their ladies had very graciously invited me to come back to San Francisco and spend some more time with them. John Weider had a girlfriend he wanted to visit there.

So, a few days later, John and I flew back up to San Fran. We still had the return half of our first class ticket that brought us to LA for the Monterey Festival so we decided to stay for a week and then return to London.

I rented a car at San Francisco Airport and drove towards the city. No credit card required – just $50 cash deposit. For once it was a clear evening. Although the sun had set and it was getting dark, the sky was still light enough to silhouette the high rise buildings of downtown. Their dark shapes were dotted with lighted windows that sparkled like jewels; the scene was enchanting and I felt euphoric.

Bill and Phil’s apartment was nothing out of the ordinary. It did have three bedrooms so I had my own room. The neighborhood was relatively quiet, compared to the ongoing circus that was the Dead House at 710 Haight St. (see pic).

So, what it was like to live with the Grateful Dead for a week?

You will not be surprised to know that, during that week, I smoked more marijuana that I ever have, before or since.

The Dead were early risers, at least compared to how we did things in London. Everyone was usually up and around by 9am and, soon after that, the first J was passed around. This was a little early for my tastes, but I usually found myself indulging sometime before noon. Things carried on like this for the rest of the day.

We didn’t have much in the way of visitors during that week except for two rather interesting characters.

One was a rather chubby hippy who hailed from Texas, known to one and all as Curly Jim. (see pic) Curly Jim Sataralow had come to San Francisco as the manager of those other pioneers of psychedelia, Austin, TX’s own 13th Floor Elevators. He had become loosely attached to the Dead and, as legend would have it, had taught the song “Me and My Uncle” to Bob Weir. “Me And My Uncle” became the most-performed song in the history of the Grateful Dead, as they performed it over 600 times.

Curly Jim also claimed that Jerry Garcia was responsible for his nickname.

Another visitor was Augustus Owsley Stanley III, known to one and all as Owsley (see pic). Owsley was THE acid king of the Bay Area hippies. He was the first known private individual to manufacture mass quantities of LSD. By his own account, between 1965 and 1967, Owsley produced no less than 500 grams of LSD, amounting to a little more than five million doses at the time. 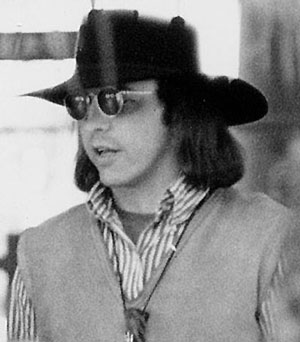 He had started off as a sound man for the Dead and was still very involved with their extended family.

As I remember, whenever these guys showed up, they brought dope with them.

Both of these individuals are now dead.

Phil was a HiFi freak and they had a very good sound system in the living room, which was usually tuned in to KMPX. The late “Big Daddy” Tom Donohue had taken over a foreign language radio station, and changed it into what is considered to be America’s first alternative “free-form” radio station. The station played album tracks chosen by the DJs on the largely ignored FM band.

This one move introduced progressive radio to the U.S. Stations using the KMPX format – or lack thereof – sprang up in major cities all over the country. It was a great station, playing lots of eclectic stuff.

One day I strolled into the living room in an altered state. On the radio, I could hear someone talking, while music played behind him. I had missed the beginning of his story thus I had no context for what he was talking about and my rather stoned state did not help. I could not figure out what was going on. Everybody seemed to sense my puzzlement and I think they found it rather amusing. I sat there and listened to the whole track – which went on for a long time – and, even at the end I still had no idea what the story was about.

It was Alice’s Restaurant by Arlo Guthrie and it wasn’t until much later, when I heard the whole thing from the beginning, that I was able to figure out his narrative.. 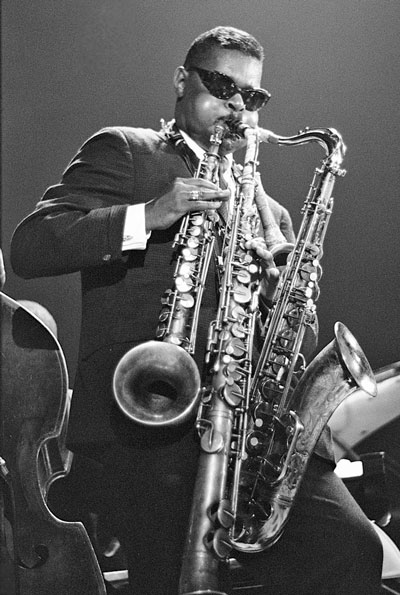 That week, Rahsaan Roland Kirk was appearing at the Fillmore so, having never seen him live, we went down there.

He was an incredibly gifted musician but a little eccentric. He was also blind.

As well as his main instrument – which was tenor sax – he often used the manzello and the strich, both being kinds of soprano saxes. Sometimes he would play them all at once, yes all three stuck in his mouth and still making fine music. (see pic)

That night, he was in the middle of his set, playing all three instruments at the same time, when he decided to climb down off the stage and walk around in the crowd. This might not have been a problem since it was only three feet off the ground, but the stage had a hole in it. It really did. The hole was near the front, stage right. So Roland, being blind, climbed down into this hole and started to move around figuring he was heading into the audience. However the sides of the hole prevented him from moving very far.

It was all a bit sad and nobody knew quite what to do. Finally he climbed out of the hole and continued his set without venturing further on (or off) the stage.

There is a heliport at Sausalito, very trendy town just on the other side of the Golden Gate Bridge. You used to be able to take a helicopter from there to the San Francisco International Airport, which, considering the hassle of trying to drive through San Francisco, made a lot of sense.

At that time, the Dead were using it as a rehearsal room and I went over there with them and hung out, walking around Sausalito with its trendy stores and restaurants or looking at the many boats on its waterfront. 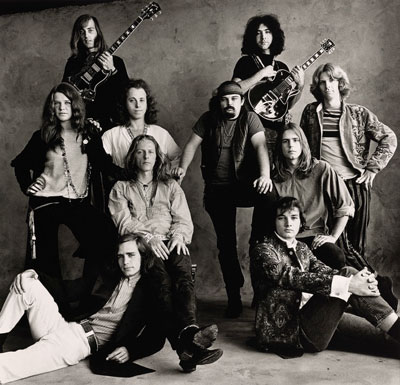 It was a relaxing, quiet and rather stoned week with the Dead. They could not have been nicer, especially their ladies. I ate like a king the whole week.

Perhaps the hardest thing for me to get used to was the genuine concern for my well being that I felt from all of them. There was a level of sincerity in their behaviour which was different from anything I had experienced before, especially from my family.

It wasn’t that there was no love in my family; there was a lot of love. And yet, most of the time, there was an undercurrent of psychic violence in the way we dealt with each other. That’s how it was with just about everyone I dealt with back in London.

With Bill, Phil and their ladies, I felt very at home. They were kind and considerate in ways that were very different from how Brit musicians treated each other.

John Weider and I flew back to London, arriving on July 18th, ready to participate in the Brit version of the Summer of Love.