First Time at the Whiskey a Gogo

After finishing at the Fillmore, we flew back to LA to play a few days at the Whiskey a Gogo. The Whiskey – that’s all we, and everybody else ever called it – is located on Sunset Boulevard in West Hollywood, very close to Beverly Hills, in an area known as the Sunset Strip. The Strip is only 4 or 5 blocks long but is packed with restaurants and clubs.

Nowadays, the Whiskey is a legend. It’s still going and it holds the unique distinction of being the only nightclub inducted into the Rock and Roll Hall of Fame. Even in 1967, it was a highly prestigious place to play. Bands were paid union scale, but all of the cool people in Hollywood and the record industry came out to see what’s happening. 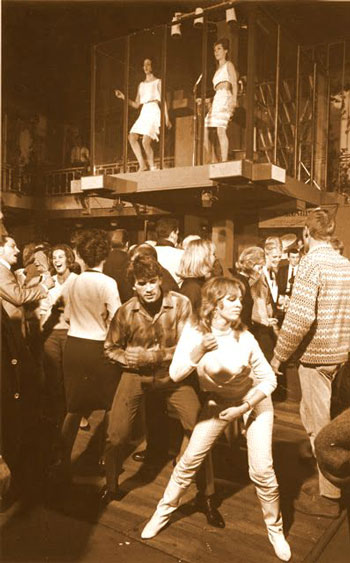 The Whiskey had its start in 1964. Although it was supposed to be a discotheque – a place where people danced to records – the club started with live music. Johnny Rivers, with whom we had recently performed at the Monterey Pop Festival, was the opening act and was resident there for some years. There was also a DJ who played records between sets.

The club was the brainchild of Elmer Valentine, a former Chicago cop. According to legend, Elmer – on a trip to Paris – visited the Whiskey a Gogo discotheque there and decided to open a similar place on the Strip.

Although it had only opened 31/2 years previously, the Whiskey had already become THE place for Southern California bands to get their big break. The Byrds, Buffalo Springfield, The Doors and Mothers of Invention had all played there and used it as a springboard to further success. The Whiskey was the in-place in Hollywood for rock stars and anybody who wanted to be around rock stars.

It had been several years since the first wave of the British Invasion. In 1967, there were more and more bands from the UK visiting LA and the place for Brit rockers to hang out was the Whiskey.

The place was popular with musicians because they treated musos very, very well.

One of the owners, Mario Maglieri, acted as maitre d’ and Mario literally loved rock music and rock musicians. Once you were considered part of the family you could always get in and were made to feel welcome. There are stories of Mario giving free meals to musicians who were down on their luck. Even after I left the Animals, I went there many times and was always made to feel at home.

There were rumors that the ownership of the club had ties to the Mob, but we didn’t care. We went down there to relax, to hang out and meet other musicians and, of course, to meet women, of whom there were plenty. 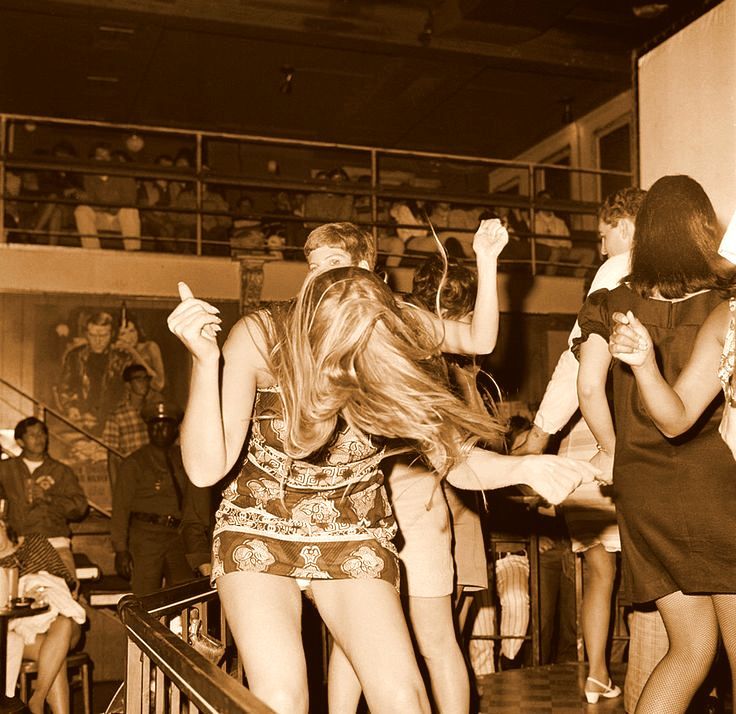 The women at the Whiskey were a different breed from any I had met before; no shrinking violets there. If they were interested in you they let you know in no uncertain terms, which could be graphic. I never went into the women’s’ bathroom but I heard that there was graffiti that would make a sailor blush, with direct and often unflattering references to rock stars who might frequent the place.

The Whiskey’s main (only) room is not a very big. Hardly bigger than any number of clubs around the world. What made the venue outstanding was what makes any club special: its clientele. 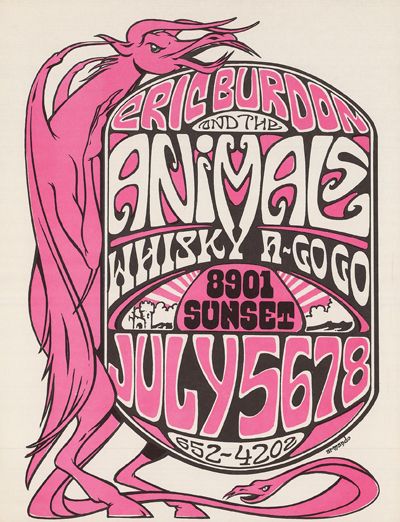 Our opening night was important for us, especially after Monterey. I was told that the place was full of the brightest names in Hollywood but I deliberately didn’t think about the audience. I wanted to focus on making the show happen and didn’t want to be distracted. That is until I heard one name mentioned.

“Ray Charles is in the audience.”

This was Eric, who had struck up a friendship with Ray on a previous trip.

“Ray Charles? Coming to see us?” I thought.

I just couldn’t believe it. I had idolized Ray Charles since 1960 when I first heard his What’d I Say and now he was coming to see a band for whose music I felt responsible. I had been somewhat nervous; now I was REALLY nervous.

I needn’t have worried. Our opening night at the Whiskey was a great success and the following three days were well received. Eric did a great job of working the audience and the band was on fire.

On the opening night Eric said: “There’s someone here in the audience that I want to acknowledge and say I’m really glad that he’s here. He knows who I’m talking about.”

I knew that he was talking about Ray Charles; I just wondered if Ray Charles did.

In the spirit of the times, Eric was making a lot of drug references in his onstage talk, sometimes even within the songs. One song from the Winds of Change album, Good Times, has a line that goes: “Instead of going drinking, I could have been thinking.”

On stage at the Whiskey, Eric changed it to: “Instead of being placid, I should have dropped some acid.” 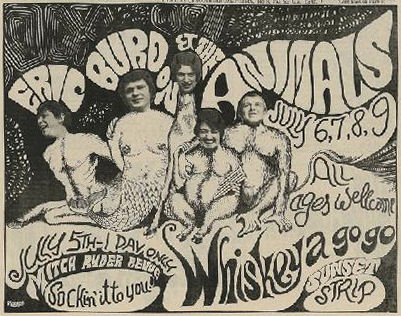 It was not that I was against drugs. I was smoking quite a bit of dope, just like everybody else, with the occasional acid trip. But Eric was taking it way too far. He would say things like: “OK, we’re going off stage now to get even more stoned but we’ll be back soon.”

I though it was unprofessional and didn’t reflect well on the image of the band. Back then, a popular singer called Dean Martin was one of Sinatra’s Rat Pack and had his own US TV show. He was well known to be a heavy drinker and even joked about his drinking habit every week on his show. I was starting to wonder if Eric was going to become the Dean Martin of the psychedelic scene.

I was disturbed about it and shared my feelings with Danny McCulloch, our bassist. There was no point in talking to Eric; I knew it wouldn’t do any good. If Eric didn’t like what you said to him, he would become VERY stubborn and would likely do even more of what you were asking him not to do.

Nevertheless, playing the Whiskey was a fantastic experience.

After those shows, we were free. The tour was over. We had no commitments for just over two weeks.

Bill Kreutzman, Phil Lesh and their ladies had very graciously invited me to come back to San Francisco and spend more time with them. John Weider had a girlfriend he wanted to visit there. John and I flew back up to San Fran. We still had the return half of our first class ticket that brought us to LA for the Monterey Festival so we decided to stay for a week and then return to London. 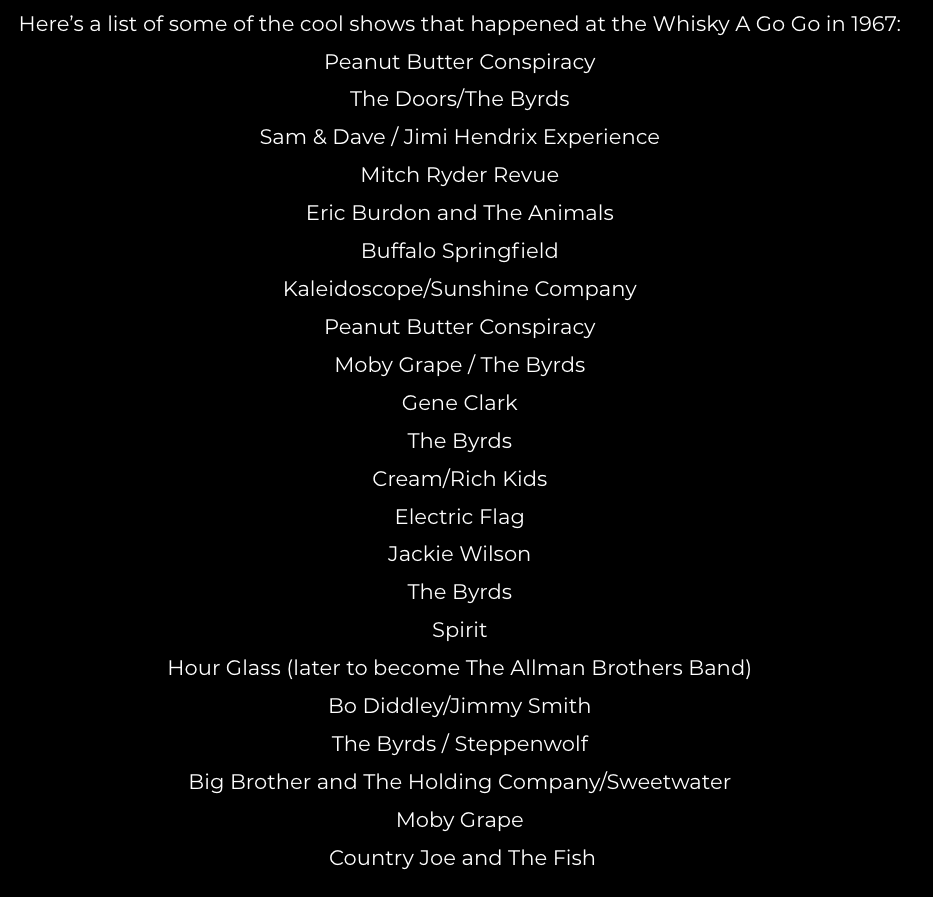