San Francisco and the Fillmore – Part One

I barely had time to recover from my UCLA Med Center experience, when we were on the plane to SFO to play the Fillmore Auditorium. We would be there from June 27th, 1967 to July 2nd.

I had renewed my friendship with Bill Kreutzman, the Dead’s drummer (this was pre-Mickey) and he invited me to stay at the apartment he shared with Phil Lesh, the bass player and their ladies. 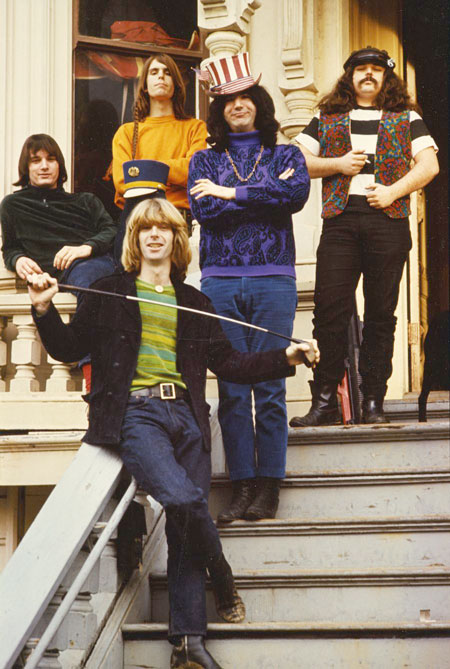 The extended Grateful Dead family was largely domiciled at a house located at 710 Ashbury Street, quite close to the legendary Haight-Asbury intersection. Now the house itself has become legendary – even though it no longer has any connection with the Dead – and tour buses stop in front of it so tourist can get pictures.

For whatever reason, Bill and Phil chose to live in their own apartment on Belvedere, just a few blocks from the Dead house. Maybe because the Dead house was somewhat of a “zoo”, with people coming and going at all hours.

It was indeed the “Summer of Love” in San Francisco. Now that we had immortalized our viewpoint of the city in San Franciscan Nights, I felt a certain obligation to see if the city matched up to our idealistic view as expressed in the song. And did it?

Not exactly. I soon discovered that there is almost no such thing as a “warm San Francisco night”. Although most of California has a very mild climate, everywhere along the coast the temperature falls quite dramatically at night (20 or 30 degrees F) except for certain times in August, September or October, or if there is what is known as a “Santa Ana” condition where the winds blow off the desert.

The city of San Francisco is situated on a peninsula with the Pacific Ocean on one side and the San Francisco Bay on the other. Because it is surrounded by cold water, it rarely gets very warm in the city; at night, the temperature is cool, to say the least. I have been in San Francisco when it has been hot during the day, but these times have been in the Fall or the Spring.

During Summer the city is afflicted with the ubiquitous marine layer that affects the whole California coast to varying degrees. It just seems to stay longer in San Francisco than anywhere else.

Mark Twain reportedly once said “the coldest winter I ever spent was a summer in San Francisco”.

All was not well amongst the hippies. The Time magazine cover article – The Hippies – would come out on July 7th, but the city, particularly the Haight-Ashbury district, was already being inundated with teenage runaways, wannabe hippies, weirdos and some genuinely badass types from all over the US, even parts beyond.

I could tell, in talking to Bill, Phil and others, that they were concerned. Crime was on the increase and there was a lot more speed and bad acid on the streets. Haight Street had always been outrageous; now it was like a madhouse, filled with freaks, a lot of whom were panhandling. Even the trash situation was out of control; the street was knee deep in garbage.

The Grateful Dead extended family were seriously considering relocating. One of the options discussed was New Mexico. While I was there, the band’s ladies, en masse, piled into a van and took off to go check it out. New Mexico is about 1500 miles from the Bay Area; thus I was very surprised when the party returned after only four days. No decision was made; the group continued to live in the Haight.

I didn’t pay too much attention to all this. After all, I didn’t live here. I could just relax and enjoy myself. This was not hard as Bill, Phil and their ladies were wonderfully hospitable and relaxed towards me in ways that I had never experienced before.

I was suspicious at first. I could not believe the anyone would choose to be that empathetic and considerate. In the UK, even with my own family, there was an undercurrent of anger and hostility in the way we treated each other. This seemed to be true in all social situations I had experienced prior to meeting these hippy people. Not only in the UK, but also in many parts of the US, particularly New York, Chicago and the East Coast.

This is not to say that they didn’t have occasional anger and flareups. But there was a consideration for the feelings of others of which I was at first suspicious and then came to highly appreciate.

I was surprised by the (relatively) early hours that they kept. In London the partying, fueled by alcohol, invariably went on until three, four or five am. I was used to getting up around eleven or noon. But the Dead were dope smokers and didn’t go out that much. Evenings would usually end around midnight or one at the latest and that meant that, by around nine the next morning we would all be up. It is said that people go to bed earlier and get up earlier in California and I found this to be true.

Of course, being up earlier meant we could start smoking dope earlier and the day would generally begin with a joint, although I usually didn’t participate that early. By this time, I was drinking less and less alcohol anyway, although wine with my meals was a ritual I continued to observe.

Susula was Bill’s “old lady” (girlfriend). She came from a well-off Marin family and enjoyed showing me around her home county. Marin County is the piece of land that stands to the North of the Golden Gate Bridge. It has astounding natural beauty, liberal politics and is one of the most affluent counties in the US.

Susula’s uncle was a race car driver and had taught her how to drive. She scared the crap out of me more than once as we drove around the mountain roads of Marin, heading for Mount Tamalpais.

From its upper slopes can be seen some of the most amazing views of the Bay Area. At its base, surrounding the road that leads up to the mountain, is the town of Mill Valley. With so many of its dwellings built on hillsides, Mill Valley is a wonderfully picturesque place in which to live, however it shares a similar climate to San Francisco and is cold and misty for much of the time.

It was cool and misty as we left the City, the first time we drove up Mount Tam. To get there, we had to drive across the Golden Gate Bridge and, yes, I was excited to be crossing this world-famous landmark for the first time. The cloud cover continued as we drove into Mill Valley. As we ascended the serpentine roads of the mountain – driving a little too fast for my liking – we broke through the cloud cover. The sky became a rich, deep, California blue. From the perennial green of the grass and trees in Mill Valley, we were now surrounded with the wonderful golden-brown hue that marks so much of California vegetation in the summer. The suddenly warm air was filled with the overwhelming cacophony of crickets.

We stopped the car at a viewpoint and looked out over the Pacific Ocean. Stretching out in front of us, as far as the eye could see was an ocean. But not of water. The ocean was obscured by clouds, the famous Marine Layer, all the way to the horizon. I had never seen anything like it. 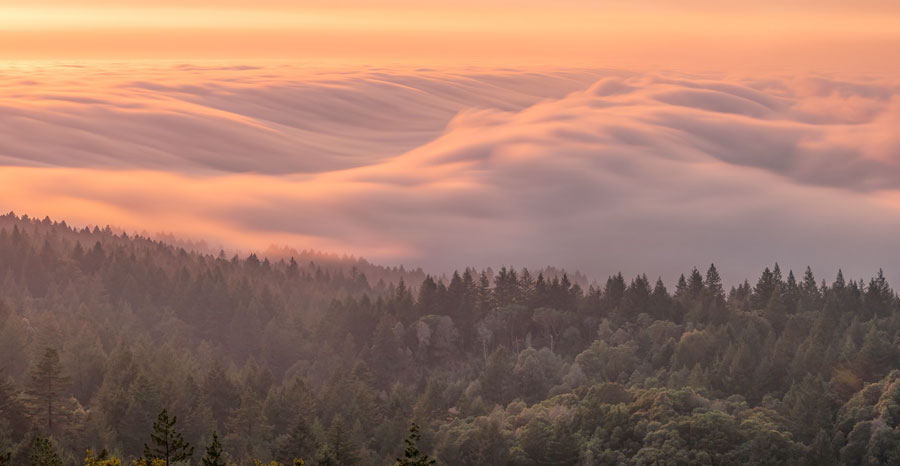 Just a few hundred feet below us the air was cool and misty; the light was grey and depressing. Up here it was hot, dry and the sunshine was brilliant, intense and inspiring. Looking back towards the city, we could see the mist spread over it, obliterating everything, except for a few hilltops that poked up through the blanket of fog and the twin towers of the Golden Gate Bridge.

Susula took me to the Mt Tam Amphitheater (technically the Sidney B. Cushing Memorial Amphitheatre), where just over two weeks previously had been held the “Fantasy Fair and Magic Mountain Music Festival”, which had been the first major event of the Summer of Love in the Bay Area.

I could barely believe what I was seeing. It was magical and I was starting to fall in love with the magic of California.

Top: the Golden Gate Bridge breaks through the fog.